Welcome to
The Seymour Group Blog
California Propositions 15 and 21: What You Need to Know 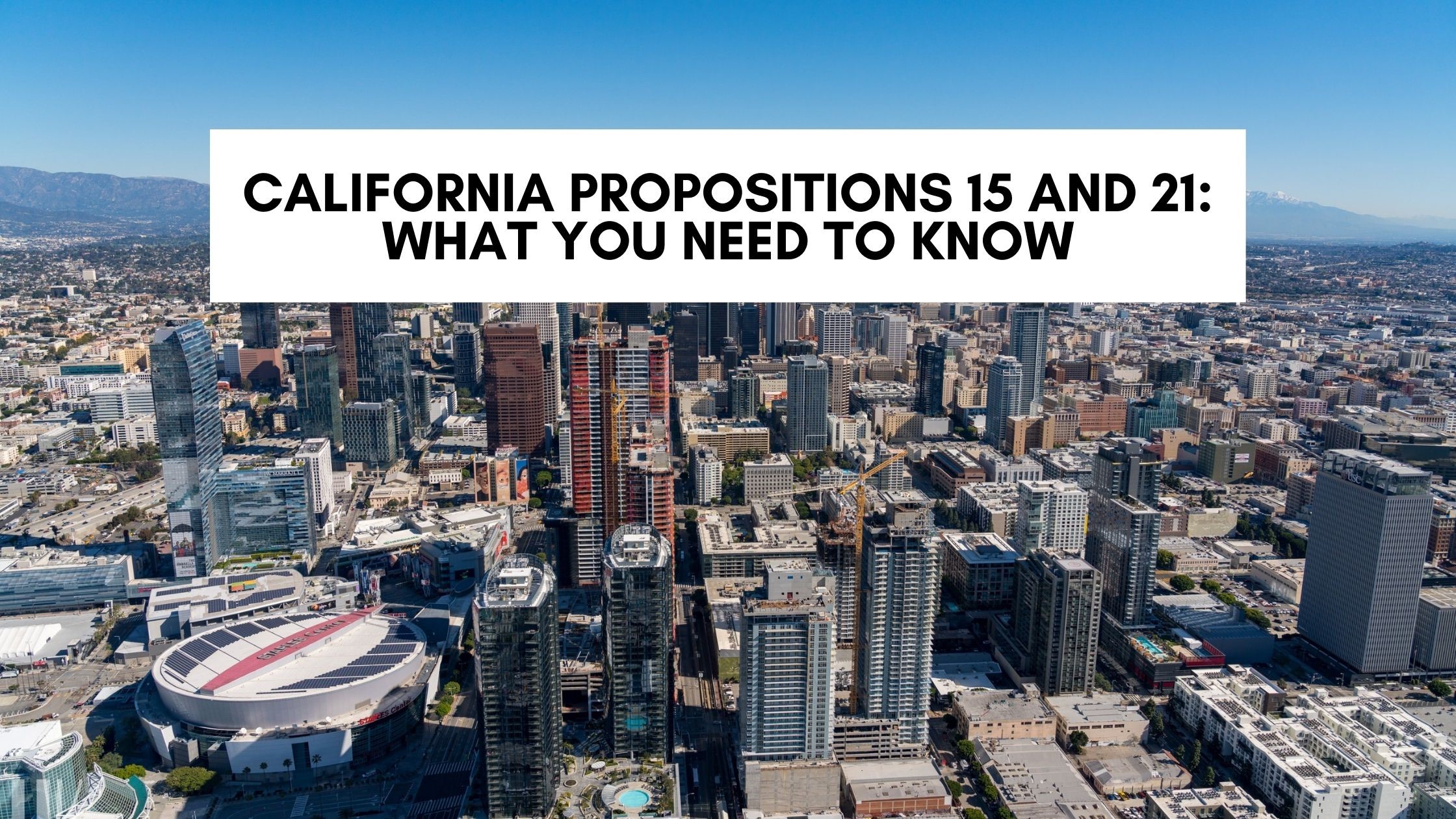 If Propositions 15 and 21 pass in California, tenants, landlords, investors, and the public at large will have to get used to seeing lots of real estate-related regulatory changes in the Golden State. Should these propositions pass, Californians can expect to see dramatic shifts in how they buy and lease residential and commercial properties, alongside significant tax policy shifts caused by these measures.

The Proposition System/Vote or Veto

California is perhaps the most directly democratic state system of government in the United States, largely due to its unique proposition system. Under this system, a ballot proposition can be submitted as either a referendum or an initiative measure to the electorate (aka voters) for a direct decision on the proposition or a direct vote, or “plebiscite”.

You can’t understand the changes proposed by Prop 15 without understanding Prop 13. Under Prop 13, enacted in 1978, a significant portion of real estate in California is currently taxed based on its assessed value rather than its current market value. Any such properties, identified on the applicable 1975-1976 assessment rolls, are subject to an annual increase equal to 2% or the current inflation rate, whichever is lower.

However, there is a catch. If a property is transferred, it is reassessed at the current market value for taxation purposes. Currently, Prop 13 does not distinguish between real estate types, like residential, commercial, industrial, etc. Property owners who benefit from Prop 13 provisions pay significantly reduced taxes when compared to property owners that do not have the luxury of being Prop 13 eligible.

Prop 15, or the “California Schools and Local Communities Funding Act of 2020” intends to reverse the effects of Proposition 13 for commercial real estate owners. The proposition will create a “split roll” for taxation purposes, which will strip taxable commercial and industrial properties of their current Proposition 13 tax protections/benefits while allowing residential property owners to remain protected by the favorable tax terms provided by Prop 13.

The estimated 11 or so billion dollars Prop 15 intends to collect for schools and local government coffers has to come from somewhere. If Prop 15 passes, many commercial property owners could see their annual tax bill increase. The most hard-hit group will be the owners of commercial properties that have been held under the same ownership for a long period of time because these owners currently benefit from significantly reduced tax bills under current policies.

Under the new measure, larger commercial and industrial properties would bear the majority of the new tax burden, as property owners with less than $3 million in holdings would be exempt. This will likely have a major impact on large, legacy businesses like Disney, Intel, or others that hold low-tax real estate in the state.

Of the two Propositions we’ve reviewed, Prop 15 seems most likely to pass, with a UC Berkeley Institute of Governmental Studies report saying 49% of voters would cast a ballot, while 34% oppose it and 17% being currently undecided.

Proposition 21 is another real estate-related proposition on which voters will make a decision in 2020. This ballot measure would effectively remove and replace the 1995 Costa-Hawkins Rental Housing Act. Before the passage of the Costa-Hawkins Act, local governments in California were allowed to pass rent control measures, with the caveat that landlords would still be able to receive “just and reasonable” returns on rental properties.

Prop 21 would allow local governments to enact rent control on all housing units, aside from housing occupied within the last 15 years or units owned by persons who own no more than two housing units with separate titles. These housing unit types include most forms of housing, including condos, single-family homes, and some duplexes, community apartments, or cooperatives.

Under the current Costa-Hawkins regime, landlords can increase rent prices to market rates when a tenant moves out of a unit. Prop 21 would require that local governments adopting rent control laws allow landlords to increase their rental rates by 15% during the first three years after a newly vacant unit opens up.

Prop 21 is likely to raise the cost of doing business for most landlords, and introduce a significant regulatory hurdle that most economists say actually reduces the supply of available housing. This may improve prospects for some large-scale landlords who have the financial and legal weaponry to deal with rent- controlled properties. Judging by past experiments in rent control it is unlikely to have the intended effect in terms of improving the climate for tenants.

According to the same UC Berkeley Institute of Governmental Studies report we mentioned earlier, Prop 21 faces steep hurdles. Only 37% of likely voters support Prop 21, with 37% opposed to the measure and 26% still undecided.